Can Student Loans Land You In Jail? 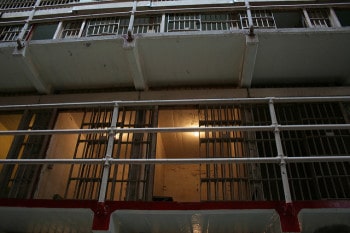 Debtor’s prison isn’t supposed to exist anymore. We recognize as a society that it doesn’t make sense to incarcerate someone for paying back a debt – they’re certainly not going to be able to pay it back from prison. However, a disturbing new trends suggests that debtor’s prison may be making a sneaky comeback.

Last month, US Marshals showed up at the home of Paul Aker, 48, and arrested him. They were armed with automatic weapons. His alleged crime was failing to pay off $1,500 worth of student loans he took out in 1987. A local congressman told Fox 26 that the federal government is outsourcing increasing numbers of student loan accounts to third-party collection agencies, which then sue the debtors.

But how does this end up with the US Marshals banging on your door? You generally can’t be arrested for being in debt (although there are exceptions for certain child support and tax obligations). Instead, you’re much more likely to face wage garnishment. The government will take a chunk out of every paycheck until you’ve paid them back. If a collection agency has your debt, they’ll also sue you for collection and get a court order for wage garnishment.

The collections and wage garnishment process can turn into a lot of court time for you and the collection agency. If you don’t pay all the court fees, show up to the right hearings, or meet the right deadlines, you may be held in contempt of court for violating a court order. That’s where the Marshals come in – you can’t be arrested for being in debt but you can absolutely be arrested for violating a court order related to that debt.

In addition to calling and sending letters demanding payments, collection agencies can throw a mountain of motions and documents at you and schedule a ton of hearings and debtor’s examinations to increase the likelihood that you’ll miss one and end up with a warrant out for your arrest.

Am I At Risk For A Student Loan Arrest?

According to one source, more than 1,500 warrants could be on the way from the Houston US Marshal’s office for student loan debtors that have defaulted. If that’s true, it indicates that we’re likely to see more arrests for student loan debts across the country as the federal government tries to recoup the money it’s been lending.

There are a number of things you can do to protect yourself from the potential risk of a visit by the Marshals. First, you’ll need to evaluate your student loan situation. Are you late on your payments? Are you in default? If you’re behind on your payments or struggling to make them every month, your first step should be to look into the repayment plans offered by the federal government. Many of them are linked to your income, so you’ll only pay what you can afford. You may be able to use a payment plan to get back on track and avoid the risk of your account going to collections.

If that isn’t enough to get you back on track, you may want to take a look at your other debts. Are you struggling with credit card debt or medical bills? If so, you could file a bankruptcy and wipe those debts out. Bankruptcy typically won’t wipe out your student loan debt, but it can wipe your your credit card and medical debt and free up the cash you need to keep up with your student loans.

Even if your account is already in collections and you’re getting calls and letters from debt collectors, there are steps you can take to avoid the risk of an arrest warrant. Deal with communications from debt collectors calmly and in writing and never admit to anything. Pay close attention to your mail, phone, and email. It’s a pain, you need to read and listen to the messages from the collection agency to learn if they’ve filed a claim against you or if they’ve scheduled a hearing or court date.

If there’s a hearing or court date, you have to go – otherwise they get a default judgment against you and you lose the right to fight the claim. In addition, missing a scheduled court date could leave you with an arrest warrant for contempt of court.

Whether they’re after a credit card debt or a student loan, dealing with collection agencies can be stressful and upsetting. Worse, they may be trying to force you to fall into contempt of court so that you’ll be arrested. If you’re struggling with student loans or other debts and dealing with debt collectors, consider consulting an experienced local attorney to learn about your rights and your options for dealing with your debt. A lawyer can help you deal with the complaints and court dates so that you don’t miss any deadlines or requirements. Your attorney can also help ensure that debt collectors are treating you fairly and legally.

At the end of the day, it’s far more likely that you’ll face wage garnishment for unpaid student loans than arrests. However, the possibility of an arrest exists. Be proactive about managing your debt to avoid the risk of a visit from the Marshals.

Skipping Town To Get Out Of Paying Back Student Loans