Just How Expensive is it to Live in Los Angeles? Bills, Rent, Taxes and More

Blog
You are here: Home / Blog / Personal Finance / Just How Expensive is it to Live in Los Angeles? Bills, Rent, Taxes and... 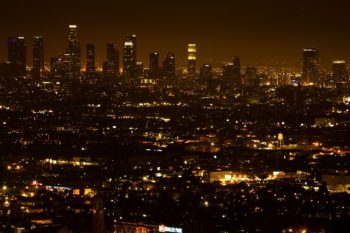 Is the cost of living in Los Angeles soul crushing? Well … how sturdy is your soul? The price to live in L.A. is 43% higher than the national average. Housing, utilities, food, and entertainment all cost more here. Taxes are among the highest in the nation, as are gasoline prices. Of course, salaries are a bit higher as well (11% more than the national average), and the weather is tough to beat. But is it all worth the price?

To give you a sense of the cost of living in Los Angeles, if you’re planning to move here or just trying to budget for life better, we’ll compare it to Columbus, Ohio, which is close to the national averages in most categories. Let’s start with what you’ll earn.

It’s important to note that these costs are the median for all properties, from one-bedroom to four-bedroom homes. This is especially important to consider when calculating rent payment. If you are looking for a one bedroom home, you will definitely be able to find a place for well under the median rent described above.

Let’s say you decide to rent just a small one-bedroom apartment for a year. Per Trulia, in Los Angeles, your current tab is $19,200 (at $1,600 per month median price for one bedroom). Although Columbus has also seen an 11% increase in median home sales, its rent has been a bit sporadic and more expensive in the summer and fall. For a one-bedroom apartment in Columbus for a year, you’ll pay $12,720 (at $1,060 per month, the latest peak).

How much will utilities, electric and phone in L.A. cost?

Utilities can be a big budget-breaker for any family, with energy cost accounting for up to 22% of Americans’ after-tax income. Compared to Ohio, the cost of utilities in California is actually reasonable.

Compared nationally, utility prices in California are about 8% higher than the national average. You can expect to pay about $180.74/month for utilities, and about $190/month for phone bills. This will clearly vary by family and size of house, and with more and more people abandoning landlines for cell phones only, this will also vary by your cell phone provider (and can remain steady no matter where you live or move). Motor fuel is a bit more, at $128 per month (the sixth-most expensive in the country), but we’ll get into more of gas costs in a bit. Due to California’s sunny weather year-round, home heating oil isn’t needed here.

Ohio, meanwhile, ranked 29th on the WalletHub list, with total energy costs at $271 per month. You’ll pay $120 per month for electric there, plus $49 in natural gas (the ninth-most expensive in the country) and another $3 in home heating oil — a total of $2,064 per year. Motor fuel costs are $99 per month.

With your one-bedroom apartment rented and utilities (minus gas) paid, your annual cost is $20,760 in L.A. and $14,784 in Columbus. Comparatively speaking, the rent is so much higher in Los Angeles that the higher utilities in Columbus don’t matter.

Getting Around L.A.: Gas and Insurance

In either town, you’ll for the most part need a car, and cars need insurance and gasoline. Gas prices fluctuate daily, but in Los Angeles, you’ll pay on average a little over $3 per gallon as of August 2017. Columbus tends to stick closer to the national average, and right now, it’s at $2.35 per gallon.

But how much do people drive in California versus Ohio? California actually has fewer drivers per 1,000 residents than Ohio and the national average. Cars in California also get better gas mileage than those in Ohio due to our less extreme cold weather, but we may be more encouraged to go out for a nice long drive (that is, if traffic doesn’t hold us down) than drivers in Ohio. Californians also travel on roads more during the holidays, November and December, than anyone else in America.

Let’s say we took the monthly motor fuel cost from the WalletHub analysis earlier into account, and pretend you were just driving the same distance to and from work as someone in Columbus. That’ll be a cost of $1,536 per year for gas for L.A. residents, and $1,188 per year for Columbus residents. Not a terribly huge difference.

Parking can also be brutal; in downtown L.A., you’ll pay anywhere from $5 to $30 per hour. Parking in downtown Columbus is anywhere from $2 to $10 per hour. We’ll assume for the purposes of our calculations that you have a parking space at your apartment and that your friends are willing to drive you into the city so you don’t have to pay for parking.

With a one-bedroom apartment, utilities, gasoline, and insurance, your annual bill is now $23,969 in Los Angeles and $16,891 in in Columbus.

Budgeting for Food and Entertainment

Now that we’ve covered where you’re going to live and how you’ll get around, let’s take a look at the other things you’ll need to get by. Groceries cost about 20% more in L.A. than in Columbus. Assuming you would spend about $400 per month on groceries, bars, and restaurants in Columbus (which means eating frugally), you’d spend more than $480 for the same things in Los Angeles. That’s $4,800 annually versus $5,760 annually.

Entertainment is more expensive is Los Angeles, too. For example, an evening movie ticket in Columbus costs $10.50 while an evening movie ticket in L.A. costs $13 to $17. According to the Consumer Expenditure Survey by the U.S. Bureau of Labor Statistics, the average person in Los Angeles spends $2,423 per year on entertainment expenses. While Columbus-specific statistics aren’t available, the average consumer in the Midwest spends $2,812 per year on entertainment — a little bit more than perhaps Angelenos who’ve already exhausted most of their budget on necessary expenses like food and housing.

Sales tax is the least of your worries; income tax is the heavy-hitter in this category. Assuming you make the median household income of about $56,000 in L.A., you’re looking at a total tax burden (federal included) of $16,945, with just under $2,000 going to property taxes. Making the median income of $45,659 in Columbus, your total tax burden is an estimated $16,668 — even though you make about $10,000 less than someone in Los Angeles — with $5,000 of that going to property taxes.

Ah, property taxes. Much lower in California, but, the higher tax in Ohio is more than offset by the lower cost of property there.

Lucky for you, you’re renting.

Your yearly bill, if we haven’t gotten too dizzy by the numbers, now includes housing, utilities, transportation, food and entertainment, and taxes. In L.A., your total is $49,097. In Columbus, it’s $41,171.

What else is there to worry about? Well, for starters, we haven’t gotten to any sort of health costs, or education — let alone if you’re helping to pay any of this for your spouse or children. How about those crippling student loans?

With just a few thousand dollars left over to pay off those debts, maybe you have a tiny chance to stow away some savings or contribute to your retirement. You’re not quite living like a pauper, but you’re not living like a prince, either. Your bill for the year in L.A. is almost the amount of your salary, so you might be on the market for a second job.

It can be hard to put a price tag on year-round 70-degree weather, though.

How to Budget Your Lifestyle in Los Angeles

If you need help with budgeting and getting your finances back on track, we might be able to help. Thousands of clients have come to us looking for an answer to get out of debt. While bankruptcy might not be right for you, don’t discount it completely! Every situation is different. We also help clients with debt negotiation and student loan repayment.

Our experienced Los Angeles bankruptcy attorneys are standing by to help you make a good decision about your financial future. Believe it or not, life after bankruptcy does exist. Contact us today for a free consultation.