Bankruptcy and Natural Disasters: How at Risk is California?

Bankruptcies in the Wake of Natural Hazards: What's LA's Risk? 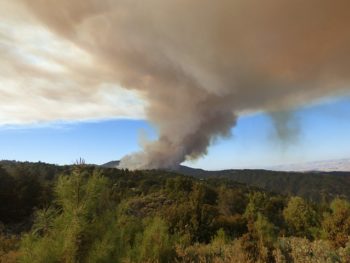 We have seen a great many natural disasters of late, calamities that will take years to rebuild. Many people lose everything, and some never recover. It would seem that following a natural disaster, there would be a flood of bankruptcies. Yet at a glance, that does not appear to be the case.

For the few months after a natural disaster, bankruptcy filings tend to follow the lines of pre-disaster filings and national economic trends. However, when we look closer, we find bankruptcies do dramatically increase, just not immediately.

Bankruptcies Increase in the Years After a Natural Disaster

We often do not see an immediate increase in bankruptcy filings in natural disaster zones. Simply put, people are trying to rebuild or just survive after a disaster. Whether or not they are paying their bills on time may not be the top thing on their minds, though we’ll get to the effects of that in a minute.

Other reasons why people don’t immediately file bankruptcy are that some of those affected by a disaster find it impossible to rebuild in the same location and leave in search of jobs or to live with relatives. So if those people do file, they file in their new location (though the bankruptcy exemptions of their previous state may apply depending on how long they lived in that state before filing).

Disaster also can immediately result in increased economic activity as people and the government hurry to rebuild. Some businesses do very well due to some of the opportunities for rebuilding. Following a disaster, people may need to use credit cards and otherwise incur debt in order to repair damages to their houses, cars, and other property. But they don’t need to repay that debt immediately. It may take some time before it is apparent they have borrowed more than they can ever repay.

An oft-cited study by Robert Lawless, a professor of the University of Nevada at Las Vegas, found that in the three years after a hurricane, there is a 50% increase in bankruptcy filings in states that have been severely affected by hurricanes. In areas where the houses are worth less and FEMA payments are lower, the bankruptcy rates are higher than in high-end housing areas. For example, Hurricane Elena in 1985 caused a 71.8% increase in bankruptcy filings in the following three years.

In Los Angeles, We Need to Be Prepared

An interesting fact ATTOM uncovered is that there tends to be high demand for homes that face danger from natural disasters. In fact, home prices in the top 20% of hazardous areas have increased twice as quickly in the last five years than those in the lowest 20%. ATTOM Senior Vice President Daren Blomquist said:

That strong demand is driven largely by economic fundamentals, primarily the presence of good-paying jobs, although the natural beauty that often comes hand-in-hand with high natural hazard risk in these areas is also attractive to many homebuyers.

Though fear of hurricanes has reduced housing prices in areas subject to flooding such as Florida and Louisiana, this has not been the case in earthquake-prone areas. This is because earthquakes happen now and then, not on such a regular basis, and people tend to have short memories of the past devastation.

Perhaps this is also the reason that most people in Southern California do not have earthquake insurance. Clearly, this is poorly placed optimism. A 2015 Uniform Earthquake Rupture Forecast from the United States Geological Survey (USGS) indicates there is a 93% probability that an earthquake of a 6.7 magnitude or greater will hit Southern California in the next 30 years. There is a 74% chance that it will be a 7.0 quake or greater. The Northridge quake in 1994 was a 6.7 magnitude.

And of course, earthquakes aren’t the only natural disasters that affect Southern California. We are also at risk for wildfires and have even experienced tsunamis. What this means is that we can’t assume that life will always go on perfectly. We can hope for the best, but we need to be prepared for natural disasters so if they do occur they do not ruin our lives.

Protecting Yourself from Financial Ruin in the Face of Natural Disaster

Additionally, look into getting insurance for natural disasters than can affect us in Los Angeles. Don’t assume events like earthquakes are covered on your home insurance. You probably need to buy additional coverage. Review your insurance policy and speak with your insurance agent.

After a natural disaster hits, you may need to fight for your rights. Keep these three things in mind:

If, in the end, you do need to file for bankruptcy protection, we here at Borowitz & Clark can help. We’ve helped thousands of clients find financial freedom through Chapter 7 and Chapter 13 bankruptcy or debt negotiation. Contact us today for a free debt evaluation.

How Much Does It Cost to Raise a Child in LA?

Holiday Spending: What You Should Know about Rewards Credit Cards